One Sentence Sum-Up of the Wedding Vibe: Glitter-covered fun with happy tears. 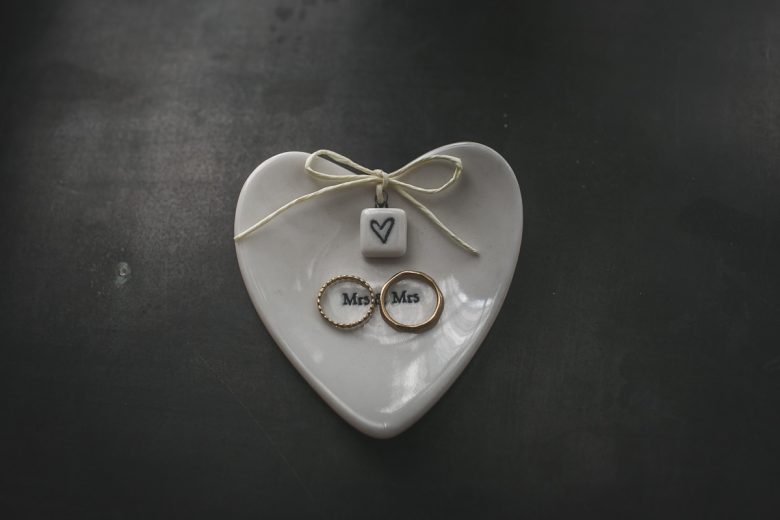 Planned Budget: The weekend we got engaged, Julie and I did the math and figured out that we could reasonably save up about $10,000 over our seventeen-month engagement.

Actual Budget: I have no idea. More than $10,000, which still blows my mind. Our families were very generous, and circumstances made it so that we were working five jobs between the two of us for much of our engagement, so we actually had more money than time. The important part to us? The only thing on our credit cards afterward was an Uber ride in San Diego on our honeymoon.

Number of guests: More than 130, less then 150 counting the babies and last minute dates. 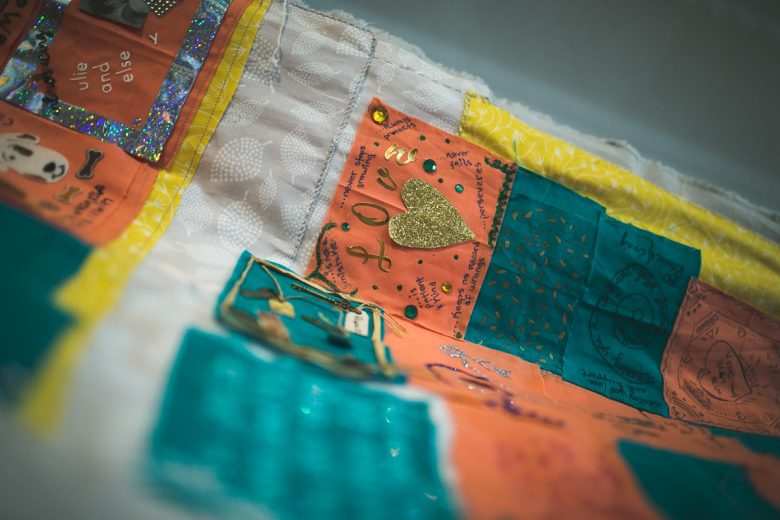 Where we allocated the most effort (and funds)

The food, the staffing, and the venue. It always seemed like such a simple concept for a wedding to me, but we ended up with so many moving parts! We knew food was very important to us and originally looked for venues where the rental cost might just be a food and beverage minimum, i.e., some of our favorite Denver restaurants. Those got ruled out because one hundred guests seemed to be the magic number for restaurant weddings, and we knew we were having more people than that, and the next tier up, restaurant space-wise, seemed to be in the $20,000–$30,000 range to buy out for a Saturday night, and that was prohibitive.

The Steuben’s food truck seemed to be a good compromise—delicious food we knew we loved, and some location flexibility. Originally, we were considering a park near our home for the ceremony and reception location (I felt strongly about having both in the same place, and we never considered a religious ceremony), but once we found out we would be having some treasured older guests, we felt like everyone would enjoy everything more if we took Colorado’s mercurial weather out of the equation. We really wanted everyone to enjoy themselves the whole time. Artwork Network had climate control, a gorgeous, adaptable space in an interesting neighborhood and a bonus of 150 chairs and several tables included in the venue fee. The fee was reasonable, and while I was initially annoyed at paying for a space at all, we decided that the price was great considering the amount of time we did not have to spend worrying about floods or one hundred degree afternoons. The downside was that the venue did not provide staff and we were responsible for things like managing trash and cleaning the bathrooms at the end of the night. Since the food truck was only serving the food, we had to hire additional staff from the bartending service to do setup, breakdown, and keep the trash from piling up during the event. Also, while there was enough physical space on the street adjacent to the art gallery for the food truck, parking in the neighborhood can be very challenging. The awesome people at Steuben’s ended up leaving an employee car parked overnight Friday in the spot we had planned for the truck on Saturday, and that worked like a charm.

The photography was the next largest expense, and honestly? If I would have known ahead of time what a wonderful presence Kristy of Moodeous Photography would be on an overwhelming day, in addition to her phenomenal photography skills—I would have paid double. No question. 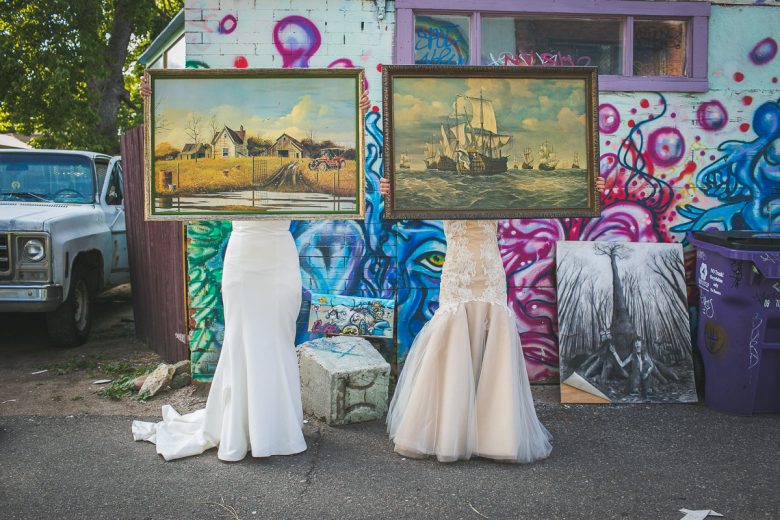 Where we allocated the least funds and effort

Julie’s dress was made by a wonderful friend, who happens to be a wedding dress designer. I think our friend, Jason Gillen, and the long-distance custom dress process actually deserve their own post, so I won’t go on about it here, but that was a huge gift—both meaningfully and cost wise. My dress was also a gift, which meant we both ended up in designer gowns, which was funny because we originally budgeted around $1,000 total for our attire and that was not what ended up happening. My parents and I picked up flowers from the Denver flower mart the Thursday before the wedding and some amazing friends came over that evening and made them into our centerpieces on our porch. They were stunning. I can say that, because Julie and I made exactly zero centerpieces—it was all guest talent.

I made my sister’s and my bouquets, and our friend Cookie’s floral crown from the same batch of flowers (and some APW tutorials!) on the morning of the wedding, and Jason made Julie’s out of grocery store flowers and produce. 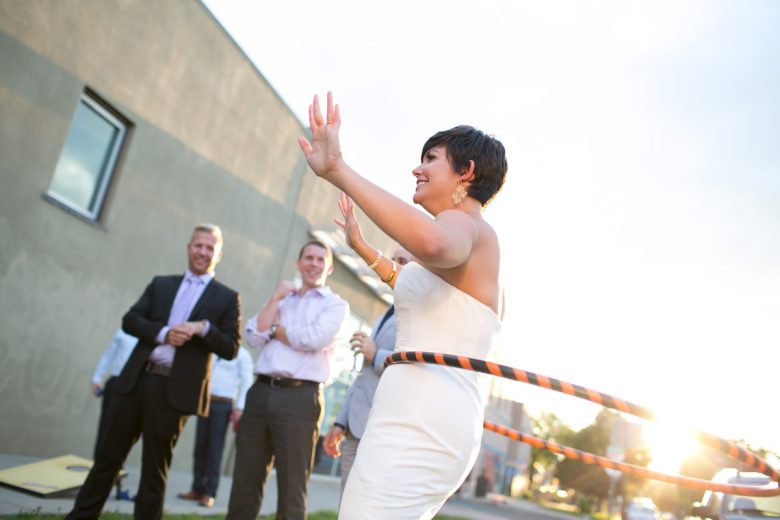 The food. It was so good. Partly because it was made to order, which we did not expect, and caused us some brief consternation because we did not realize that was how things were going to be done and it was taking the last group of people a very long time to get their food. Moral of the story? Ask a food truck how they plan on actually feeding a large group of people, and if you serve them something very fresh, made to their specifications, and delicious—they’ll forgive you if it takes awhile. With our crowd, it also helped to give them drinks.

The huppah. We sent out squares with every invitation, people returned them with their RSVP’s and then I stitched and glued them all together. It was a tremendous labor of love, mostly because I vastly underestimated how much some knowledge of quilting is helpful when undertaking a quilting project. However, it was a treasure before we got married beneath it, and now, I couldn’t love it more.

The day-of coordination team. Oh my goodness, how the day of coordinators were worth it.

Having our dog, Samantha in the wedding. We didn’t actually get to see her go down the aisle, but the collective “awwwww” when she came out was fantastic. We designated several people as appropriate “Sammie-sitters” for the cocktail hour, and her puppy raisers actually ended up with her, which was so special. Then, one of the coordinators drove her to our hotel before dinner was served (which was more relaxing for Sam and for us). It was a headache, and probably single most logistically complicated part of the reception, but it was awesome. The 168 cocktails worth of basil and jalapeno simple syrup we made, because the bartenders lost the recipe we gave them and never used it. I’m mad about that simple syrup. Also, I have no idea what they ended up serving as our signature cocktail, but it was delicious, although please note: we’re still angry about that recipe. Also, the chalkboard signs I meticulously lettered because they were very important to Julie never got put up, but I think it was still worth it to make them for her. 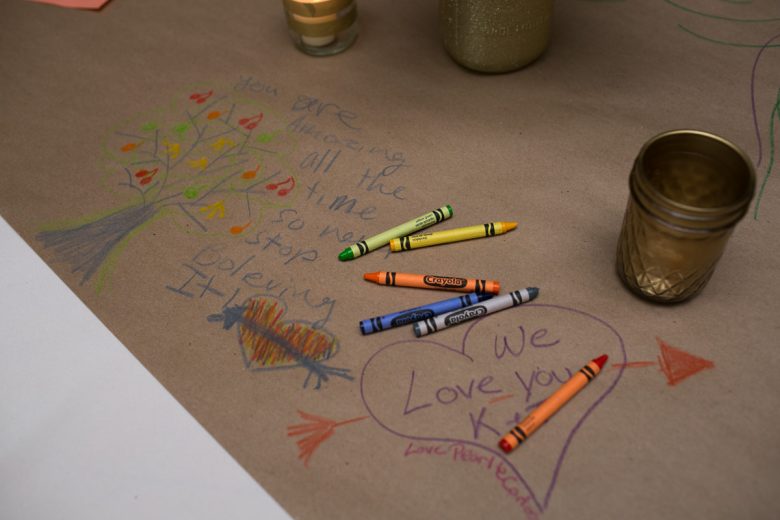 Everyone just went so far out of their way for us! Our families, eased financial stress and let us throw some money at some problems. All the people who looked out for Samantha. Cookie and my sister, Karley, were such rockstars—everything that got schlepped, and finished and accommodated in those last few days happened with their help. Our officiant, Heather, was such a dream. My friend, Alex, checked in on my mental and emotional status via text pretty much every day of those last two weeks and he will never know how much that actually really helped me. All of your event planning and wedding executing experience is not actually going to help you here in the way you think it’s going to. Because you don’t actually get to be in charge of the wedding Also? Listen to your wife. You’re marrying her because she’s smart. Kelsey: The ceremony. And, way surprisingly, taking pictures after the ceremony—because it was just Julie, Kristy, and I walking around the neighborhood, drinking champagne, and being fabulous. My mom telling me she was proud of me as we were leaving.

Julie: Our first look. I wasn’t expecting to get to run down the alley and tap you on the shoulder. It was so fun. We planned every part of our wedding, we even practiced our vows, but that we didn’t plan. It was just raw and spontaneous and so fun.

Both: The horah. Mostly.