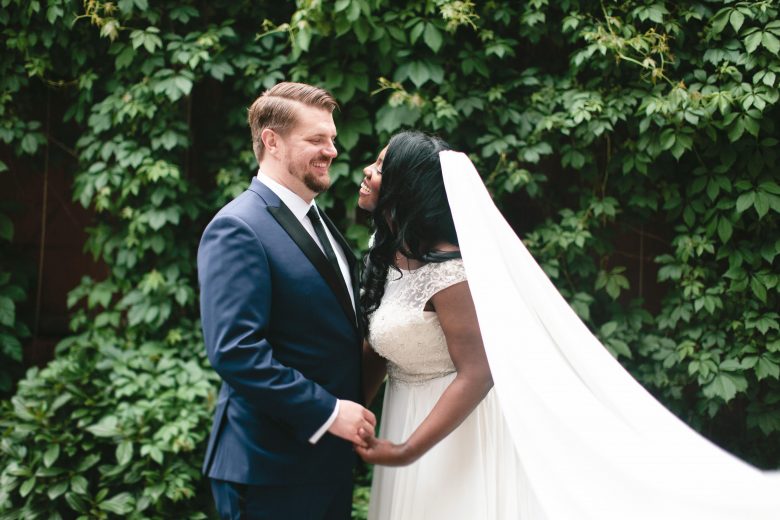 If you are as basic as I was before I got married, right now you’re spending a majority of your wedding planning time surfing Pinterest. Being born and raised in Connecticut, the expectation for my nuptials was to have something lavish and decadent. But living as a broke babe on a beer budget in Portland, I was required to make a decision about where we would actually have the wedding. Because of my champagne tastes, I calculated I could get all the frills for half the cost if we planned for an intimate ceremony in the Pacific Northwest.

Like many ladies after they get engaged, I got carried away with visions of all the champagne-colored sequins and repurposed mahogany banquet tables that could potentially adorn my reception. Whether I was searching images of groomsmen’s bow ties made of silk and cashmere or an over-sized custom-fit tiara encrusted in the rarest tanzanite stones, nothing was too much for my “special day.”

However, the one the search that repeatedly came up short? Images of real Black women getting married.

Here’s the thing: Black women fall in love. Just like every other race of people. Unfortunately, the bridal industry is extremely white, and I felt this especially strongly getting married in Portland, Oregon this past May. Wedding magazines, bridal conventions, local wedding vendors, and wedding blogs are all wrapped tightly in an organza veil of whiteness. Pick up any mainstream bridal magazine and I can guarantee there will be maybe one or two Black brides—if any at all—and one of them will be a model. Either of those brides will likely have pin-straight hair and be thin with a light complexion. Forget about seeing a buxom bride like myself with kinky hair and a fat ass. It is simply not going to happen.

After we got engaged, my excitement was enough to blind me to the harsh realities that were actually involved in planning a wedding. There were a lot of things I didn’t expect to happen prior to setting a date. For example, nobody warned me about the nonstop anxiety. And none of the wedding articles I read could have prepared me for the stubborn and erratic behavior of some of my relatives.

Despite all of these things being stressful and unforeseen, most of them were totally manageable, even though they were out of my control. None of these bumps in the road bothered me in the beginning, since I was too busy being over the moon about planning what people in the industry incessantly referred to as “our special day.”

Close Encounter of the Wedding Kind

But eventually, microaggressions slowly crept in, and the fact that I was a Black bride managed to impact almost every decision I made for the wedding. My wedding planners, who were white, had a list of vendors they worked with. At first, I gave their list a shot. But no matter who it was on the list, every time I arrived for an in-person meeting, that vendor would stare at me as if ET himself had just strolled in looking for Reese’s Pieces.

Maybe it was the idea of a Black woman getting married that seemed stranger than an extraterrestrial when I sat down to meet with some of the vendors on that list. But it was extremely uncomfortable to meet with people who I was ready to pay large amounts of money and find they were too uncomfortable in my presence for me to feel comfortable enough to hire them. None of them seemed culturally competent enough to handle a simple conversation with me, let alone attend my wedding and not handle it like some National Geographic exhibit.

In retrospect, I hired these planners because I was sold on the images they showcased on their business websites, with each bride looking exactly the way I had envisioned myself on my own “special day.” The endless assortments of photos on their Instagram pages were the epitome of happily ever after. Stills of smiling brides posed next to sky-high tiered buttercream cakes, and flawless bridesmaids chasing after giggling flower girls decorated with delicate floral crowns—with each of these scenes happening alongside the Love Of Their Life.

The only difference between my wedding fantasy and theirs was that everyone in their vision was white.

It should’ve been my first red flag, but I only noticed once I realized that my coordinator seemed irrationally scared of me, and this resulted in her inability to communicate with me openly and honestly in order to get the best end result for the wedding.

The worst part about receiving subpar service from my planners is that “Bridezilla” can’t exist as a Black woman. The assumption is already set up that I will have an attitude and be angry, so I ended up planning everything despite having paid an entire company handsomely to do so. I was rendered helpless because I didn’t want to play into a stereotype that I was certain would be attributed to my race if I didn’t act respectably.

Finding vendors who I could communicate a full range of emotions to became the defining criteria I used to determine who else to hire to work at our wedding. I vowed to find wedding businesses that strive to work with clients outside the boundaries of the target “Becky” clientele that most local vendors sought out. This task did not prove easy, but it allowed me to grow and understand that their lack of culture shouldn’t make me ashamed of mine or lead me to water myself down.

It was a hard no for one of the DJs I interviewed, who needed clarification on the definition of “trap music.” And I got up and left a meeting with a florist when she said she had never heard of or seen Kim and Kanye’s floral wall before I mentioned it. I started my search for the perfect makeup artist a year in advance. After spending hours scouring dozens of hashtags of local professionals, I’d seen hundreds of images that, once again, didn’t have a trace of any melanin. And many of the local professionals here didn’t have foundation that went past the color “dark tan.”

Say Yes to the Stress

Visiting dress shops was also a nightmare, because none of the sample sizes are designed beyond a size six or eight. I didn’t expect the sizes to fit perfectly, but a lot of women of color can attest to being voluptuous-to-curvy, and this experience was just one more example of how I wasn’t the consumer they had in mind.

In fact, I often found it easier to plan for my white bridesmaids and white fiancé than I did for myself. Whenever I called a salon and explained that I had a variety of hair textures in my wedding party, I very seldom got a call back. But several people responded once I clarified it would only be white men and women getting their hair styled. (That clarification was made by not mentioning hair texture at all, so the default was assumed to be white.)

I can’t say for sure why wedding magazines don’t feature more Black women, but I know from experience exactly how Black women are perceived. We are not seen as delicate. We are not seen as soft. And one can almost draw the conclusion that we are unlovable in accordance with what is represented in the mainstream bridal industry.

Many wedding websites are flooded with white, cis, heterosexual couples getting married in every possible scenario. Literally every style of wedding: classic, nautical, vintage, rustic, romantic, modern, and casual, with everything in between, to show love in all of its various shapes—as long as those shapes are straight, white, and thin. Every now and then, I would get excited about an image of a Black couple, but it was almost always a celebrity or athlete wedding (which is far from the norm for anyone, and a situation that is most likely perceived as “transcending” race).

Somewhere along the way, I was lucky enough to eventually find the resources that showcased brides who looked like me. Munaluchi Bridal is a site created out of necessity to combat the whiteness of the wedding industry, and the site features brides from all walks of life. It is described as “the leading multicultural wedding publication catering to women of color.” It is a stark contrast to the blizzard of white brides that dominates other wedding websites. I could spend hours surfing through waves of different shades of melanin that encompass Munaluchi’s photo galleries. And it was the first real example I found that showcased dozens of vendors and bridal companies that catered to a variety of different cultural backgrounds without tokenizing or exotifying the non-white brides being featured.

APW, on the other hand, is a site that provides space for socially conscious brides, and boasts that they “don’t believe that all those things people tell you are traditions actually are traditional,” while “normalizing the messy reality of wedding planning.”

Both of these resources were indispensable at a time when I needed support in not feeling like I had imagined all of the microaggressions I encountered during planning. Visiting these sites was crucial in allowing me to feel like I wasn’t being overly emotional, and that the problem was with the wedding industry, not with me.

Sadly, publications like APW and Muna are few and far between.

After a long, treacherous year of planning, I was blessed to find vendors who were incredible and kind. They also happened to be magicians who transformed the empty venue we selected into the most majestic location, with flowers and music that didn’t require me to compromise myself or my culture. They not only treated me like a normal person, but worked to advocate for me when I explained why I wasn’t comfortable getting angry at incompetent vendors. And my pro-Beyoncé wedding photographer was not only there to capture every picture-perfect memory from the day, but she held absolutely no judgment when I requested we recreate the bridal pose from Solange Knowles’s wedding. Right up until our wedding day, these professionals made me feel like I mattered. It wouldn’t kill the rest of the bridal industry to recognize that, too.

In the end, my wedding was flawless. I hope my critique of the wedding industry doesn’t shadow the magnificent feat of marrying the man I love while being surrounded by people I adore, nor do I intend for it to taint the work done by the amazing team of people mentioned above, who were thrilled to witness love in any color. Rather, I hope it sheds some natural light on the desperate need for inclusion in a white-washed industry.

Jagger Blaec is a freelance professional journalist located in Portland, Oregon. She began her career as a writer after college, when her dreams of being a hand model were tragically cut short. She currently writes about wedding stuff, cannabis, body positivity, and intersectional feminism. Blaec is a newlywed with a furbaby named Ralf Garfunkel. You can keep up with her on Twitter by following @basicblaecgirl