As we discussed earlier this week, “having it all” is a deeply flawed concept (from its limitations to mostly upper middle class white women to the fact that having it all was never intended to be…a thing to begin with). And while most of the discussions we’re having at this point are more meta than actual, it’s hard to stop internalizing the fact that we should at least be trying to have it all (or, do it all, as it were.) So today, as a reminder that sometimes goal digging isn’t the only thing to set our sights set on (sometimes nap digging is a thing too), we’re kicking off this month with fifteen badass, successful women, talking about why having it all is totally bullshit. Just in case you ever forget: “Guilt is a way of getting a group to conform; you get them to oppress themselves by making them feel guilty. In the earlier stages of feminism, women were told they could not be whatever it was they wanted to be. After women became those things anyway, then society said, ‘All right, you’re now a lawyer or a mechanic or an astronaut—but that’s only OK if you continue to do the work you did before—if you take care of the children, cook three meals a day, and are multiorgasmic until dawn.’”

“You can’t have it all at once. Over my lifespan, I think I have had it all. But in different periods of time, things were rough.”

“‘Shonda, how do you do it all?’ The answer is this: I don’t. Whenever you see me somewhere succeeding in one area of my life, that almost certainly means I am failing in another area of my life. If I am killing it on a Scandal script for work, I am probably missing bath and story time at home. If I am at home sewing my kids’ Halloween costumes, I’m probably blowing off a rewrite I was supposed to turn in. If I am accepting a prestigious award, I am missing my baby’s first swim lesson. If I am at my daughter’s debut in her school musical, I am missing Sandra Oh’s last scene ever being filmed at Grey’s Anatomy. If I am succeeding at one, I am inevitably failing at the other. That is the tradeoff. That is the Faustian bargain one makes with the devil that comes with being a powerful working woman who is also a powerful mother. You never feel a hundred percent OK; you never get your sea legs; you are always a little nauseous. Something is always lost. Something is always missing.”

“The choice not to have it all, far from being defeatist, is extremely liberating. Slugging through a decade of work but losing touch with your family and friends or with your community creates its own sense of failure.” “I think it’s insulting. What are you ‘having?’ A party? Another slice of pie? ‘All’ implies that a woman staying home with her kids is somehow living a life half-full. What we’re really talking about is doing it all. How do we help women do all the things they want to do?”

“I don’t think women can have it all. I just don’t think so. We pretend we have it all. We pretend we can have it all. My husband and I have been married for thirty-four years. And we have two daughters. And every day you have to make a decision about whether you are going to be a wife or a mother, in fact many times during the day you have to make those decisions. And you have to co-opt a lot of people to help you. We co-opted our families to help us. We plan our lives meticulously so we can be decent parents. But if you ask our daughters, I’m not sure they will say that I’ve been a good mom. I’m not sure. And I try all kinds of coping mechanisms.”

“No one can have it all. Any woman or man in the throes of a career with kids at home will tell you, nobody has it all. One of the things that has been accidental is that my husband [editor and writer Todd Purdum] doesn’t travel as much for his job which gives me flexibility to travel more. When I have been busier he has stepped up, and when he has been busier I have stepped up. For him to be at [his previous role at] the New York Times at a daily job covering the White House and for me to work at Warner Bros., that would have been impossible for us. Our family comes first. When [the children] were younger, I worked from home for a lot of years. They are ten and fourteen now, and it is much easier than it was ten years ago. My career has had chapters, and my husband’s career has had chapters, and we have figured out ways to mesh those in a way that has mostly worked. Sometimes it has worked more smoothly than others. We certainly don’t think we have it all. Taking a moment to be grateful in spite of the challenges can be helpful. “Having it all is the worst. No matter how much we all have and how grateful we are for what we have, no one has it all, because we all make tradeoffs every single day, every single minute.”

“‘Let us rediscover the pursuit of happiness,’ [Anne-Marie] Slaughter says [in ‘Why Women Still Can’t Have It All’], ‘and let us start at home.’ That’s the most presumptuous line in the whole article. Maybe some women don’t find happiness at home. Maybe some women do find happiness in their careers. Or in unprofitable art. Or in providing for their families. Or in being alone. There isn’t a singular goal for any person—man or woman—and yet feminism has sold us this prepackaged notion of success that, when you open it up, is totally undefined. And I think that’s my main problem with Slaughter’s article—that she tries to come to a conclusion about this thing that is almost entirely without definition.”

“I do think women can have it all, but not all at the same time. Our life comes in segments, and we have to understand that we can have it all if we’re not trying to do it all at once.”

“I can’t stand whining. I can’t stand the kind of paralysis that some people fall into because they’re not happy with the choices they’ve made. You live in a time when there are endless choices…. Money certainly helps, and having that kind of financial privilege goes a long way, but you don’t even have to have money for it. But you have to work on yourself…. Do something!” “I don’t think anyone can have it all. Who would want it? Having it all sounds like a lot of maintenance. Life is about priorities and choices, not just ones externally imposed on us as women, but ones we are able to define for ourselves.”

Anne-Marie Slaughter, Former Director of Policy Planning at the State Department; President and CEO of the New America Foundation: 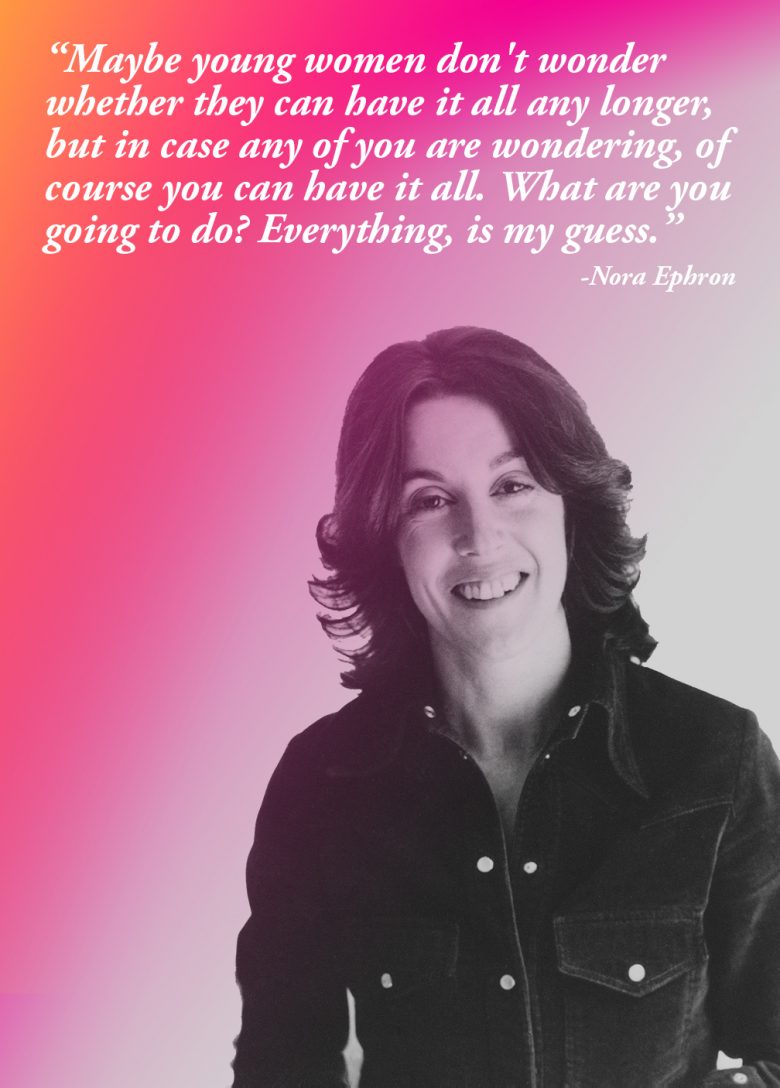 “So what are you going to do? This is the season when a clutch of successful women—who have it all—give speeches to women like you and say, to be perfectly honest, you can’t have it all. Maybe young women don’t wonder whether they can have it all any longer, but in case any of you are wondering, of course you can have it all. What are you going to do? Everything, is my guess. It will be a little messy, but embrace the mess. It will be complicated, but rejoice in the complications. It will not be anything like what you think it will be like, but surprises are good for you. And don’t be frightened: you can always change your mind. I know: I’ve had four careers and three husbands.”