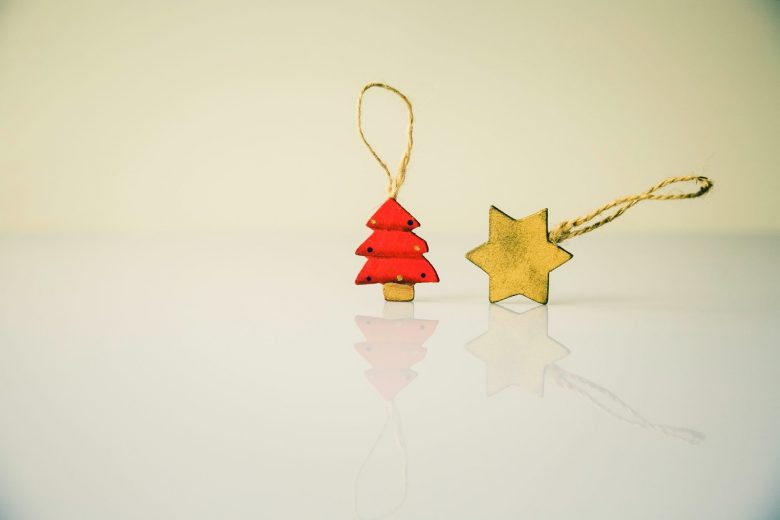 When I was growing up, celebrating winter holidays was a decidedly Christian affair with many Midwestern and Nordic traditions. The fun started on December 1st when we would break out the decorations. My mother was very particular with how she decorated the tree, so the ornaments we had that weren’t in keeping with her theme were hung on garlands displayed over the kitchen windows.

My parents had the large bay window to showcase their expansive ornament collection, and my younger brother and I each had a standard size window to hang the ornaments my parents gifted to us on a yearly basis. During my parents’ first Christmas, they only had one ornament, which had been given to them as a wedding gift, and my mother described the tree as looking sad and bare and Charlie Brown-esque. To prevent this calamity when my brother and I celebrated our first Christmases out of the house, my mother made a point of buying us each an ornament every year for our stockings so that we would have a modest collection of decorations for our first trees.

the traditions didn’t stop there

In addition to decorating the windows of the house on the first, we would bring out the large vintage nativity that had been passed down from my maternal grandmother. We only placed out the animals and the shepherds; on Christmas Eve we would bring down Mary and Joseph, and on Christmas Day we would make a big show of bringing down Jesus and the angel. The three wise men would make a brief appearance on January 6th before we packed up the Christmas decorations for good. We had an advent calendar that one of my aunts had painstakingly sewn for us, and my brother and I would fight over who got to be in charge of placing the odd numbered knick knacks on the calendar’s tree, thus ensuring that on the twenty fifth the triumphant child placed the star on the top.

December 6th was one of my favorite days of the month. My mother was very adamant about keeping the Christ in Christmas, and so Santa Claus did not visit us on Christmas Day. Instead, he gave us our stockings on St. Nicholas Day, and we often skipped school to go see a holiday movie and enjoy a dinner out together. December 13th was the day that my mother paraded me out as St. Lucy; dressed in a white nightgown with a red sash while balancing a be-candled wreath on my head, I served the family “Lussekatter,” or Swedish saffron buns and tea. These minor winter holidays glowed on the calendar like pinpricks, keeping us busy until Christmas Eve. When that day finally arrived, we would gather together in the living room and my father would read to us the story of Mr. Skip, the little brownie who, along with his seagull friend, helped Santa Claus make sure all the children of Waldoboro were in bed and asleep.

The next day, we awoke to three presents under the tree—not from Santa Claus but from Jesus. Included in the festivities of the day was an ice cream cake and sparkling cider, traditional birthday fare in our house, and we would sing “Happy Birthday” to Jesus. Four days later the cake and cider would be broken out again, but this time instead of celebrating the birth of our savior we would direct the felicitations toward me, as it was my birthday. It was indeed a busy month, and one that was a foundation of many happy childhood memories.

i’m navigating religion with an agnostic by my side

Recreating these memories and traditions with my new fiancé has been a unique challenge. The older I get, the more disillusioned I become with Christianity, and celebrating the complex and decidedly Christ-oriented traditions of my childhood seems disingenuous. If only it were as simple as it is for my fiancé, an agnostic who celebrates the holiday without a tree or any of the accouterments of my youth.

I feel the need to have a spiritual outlet in my life, and so while I attend an open and affirming Christian church, I go through the motions of celebrating a holiday dedicated to the birth of Jesus. I’ve experimented with Neo-Paganism in the past, something that meshes well with Christian traditions since many of them borrow from ancient pagan roots, but I no longer feel the pull toward that faith that was so prevalent in my teen years. I feel a very strong calling toward Judaism, but a conversion is a difficult process for a young gay woman reliant on public transportation and engaged to a non-Jew. Certainly my fiancé’s perspective on the holidays lends well to an interfaith situation, yet I found myself pining (if you’ll pardon the pun) for a tree, something we didn’t end up having this year.

I recall being a student in high school and bringing up to the principal that I was uncomfortable with the Christmas decorations on display in the school. She dismissed my statements because I attended the same church she did; I didn’t have the heart to tell her that my parents forced my attendance and I didn’t really consider myself Catholic.

what role do religious beliefs play these days?

While studies and polls indicate the majority of American adults have some religious beliefs, it seemed to me that many of my peers were either atheists or raised in “Christmas/Easter” households that did not put any emphasis on faith and were, in fact, quite agnostic. It was then that it occurred to me that Christmas, much to my mother’s chagrin, had evolved from an important and holy holiday into something cultural and more family/gift focused. While in my house growing up, Christmas was an important religious holiday, in most other households in my area it had become something that people from a variety of backgrounds could partake in without compromising their beliefs.

In a perfect world, I would have had my life and my belief system figured out before I had met my fiancé. I would have gone into this relationship with concrete knowledge of what moral and spiritual systems work for me and we could have created new traditions that would balance our needs and desires relating to faith and to our cultures. But this is not a perfect world, and spirituality is nothing if not a journey.

I believe wholeheartedly that there is something to be said for growing as individuals while growing as a couple, and certainly personal growth does not stop at age thirty once you have decided you are ready to settle down and have kids. Some things about me will grow and change through the decades, and other things will stay the same; in the meantime, I will be tethered to someone who will keep me in check and make sure that in spite of (and because of) all those changes I will stay true to myself.

We will form and break traditions as we begin this new life together, and as I begin a complicated spiritual journey, she will stand by me and offer me support.

Aurora is a disabled queer vegetarian who enjoys doing crazy things with her hair and expanding her theological horizons. She is a hipster housewife, wanna-be radical homemaker, and proud Clubhouse program member/mentor who lives in the suburbs with her wife and their Chihuahua-Husky mix, their Lab-Chow mix, their Mackerel Tabby, and their bearded dragon. In her spare time she cooks, journals, creates art, and sings in the shower. She also blogs about her life and various mental health concerns.