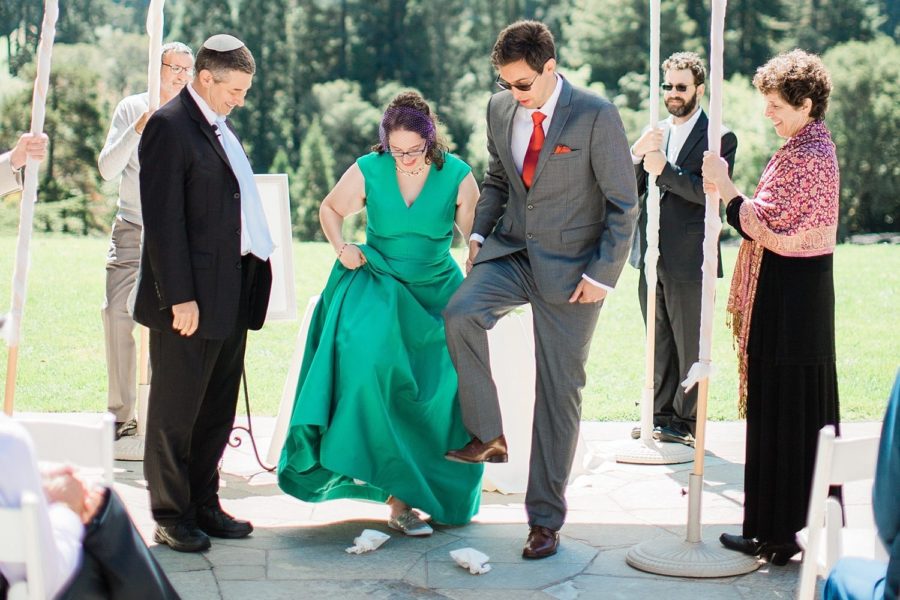 On August 12, 2017, a “Unite the Right” rally in Charlottesville, Virginia, erupted in violence. Waving Nazi flags and shouting, “Jews will not replace us,” a mob of white supremacists clashed brutally with counter-protesters. In a horrific culmination, a right-wing protester drove a car into a crowd, killing counter-protester Heather Heyer and wounding more than a dozen others.

Meanwhile, across the country in California, my husband and I were preparing to participate in one of the most public and recognizable Jewish rituals. The next morning—only vaguely aware of what had transpired in Virginia—we gathered our families around a colorful ketubah, exchanged rings under a white silk chuppah, drank kosher wine, and stomped glasses wrapped in cloth.

Wedding Planning As A Bride Of Color

Though we both consider ourselves secular and agnostic, we never doubted for a moment that we would have a Jewish ceremony. In the year and a half since that weekend, I’ve thought a lot about why.

Growing Up Jewish in America

I’ve never been shy about identifying as Jewish. And I’ve gravitated to Jewish religious ritual before: I leaped at the opportunity to have a bat mitzvah, and I was the only kid in my Hebrew school class who was there entirely by choice. But my identity has always skewed away from the faith end of the spectrum. I don’t attend synagogue; I don’t keep kosher; I move freely in spaces dominated by my white Christian peers. My husband grew up even more assimilated and less observant than I did.

And yet, when it came time to plan our wedding, we were both adamant that we wanted a Jewish ceremony. I rejoined the Conservative synagogue where I’d been bat mitzvahed nearly two decades earlier. We collaborated with the rabbi to craft a ceremony that melded the core traditional elements of Jewish wedding tradition with our own progressive sensibilities.

We sought out an egalitarian text for our ketubah, or marriage contract; we chose secular humanist translations of the Sheva Brachot, the seven wedding blessings; we broke two glasses instead of one. At the moment our feet struck the stone patio, the rabbi led our guests in a rousing song: “Siman tov u’mazal tov, mazal tov u’siman tov.” I felt utterly, joyfully at home.

At The Crossroads of Privilege and Marginalization

Judaism is an odd bird among the major religions in America. It’s an ethnicity, a culture, and a faith all rolled into one. And it’s at once expansive and insular. You can identify as Jewish without believing any theology or practicing the religion—in fact, that’s exactly how I was raised. But birthright matters. If you were born Jewish, the thinking goes, you’re Jewish for life; if you weren’t, our conversion rituals are less a welcome party than a gatekeeping exercise.

In the United States, Jewishness is both a privileged and a marginalized identity. Not all American Jews pass as white, but for those who do many have been afforded a taste of white privilege. This is especially true for Ashkenazi Jews like my husband and me, whose ethnicity and culture have come to define American Judaism in the public eye: think bagels, latkes, the Yiddish language. The majority of Jews in the U.S. are Ashkenazi, descended from the Central- and Eastern-European branch of the Jewish diaspora; by contrast, most Israeli Jews are Mizrahi, descended from those who never left the Middle East.

Our European heritage frequently allows us to pass for white if we so choose, and our identity has historically gone hand-in-hand with a life of upward mobility. My husband and I grew up in affluent communities. We received degrees from elite higher-education institutions. We work in white-collar professions, own a home, accrue wealth. But as the snarling torch-lit faces of the Charlottesville rioters made clear, our privilege is both conditional and fragile. Our identity is still a rallying cry for the worst kind of racist venom.

For a rabbinical perspective on all this, I reached out to my friend Joshua Stanton. He’s the rabbi at East End Temple in Manhattan, and vocal advocate for social justice and interfaith dialogue. He also officiates his fair share of weddings.

“Relatively few people who come to my office are from an observant background,” Rabbi Josh told me. Along with couples who identify as Jewish, he also works with interfaith and even non-Jewish couples. “My job, in weddings as elsewhere, is to try and provide the narrative framework to describe what’s so special about the couple and their relationship. And Judaism has a great framework for that.”

When it comes to public perception of Jews in America, he said, we live in conflicted times. On the one hand, there seems to be ever more mainstream acceptance—even embrace—of Jewish traditions and practices. According to a 2017 survey by the Pew Research Center, Jews are one of the most warmly viewed religious groups in the U.S. And in his own work, Rabbi Josh has seen a rising interest in Jewish ritual and practice from throughout his community.

On the other hand, anti-Semitism is as alive as ever and growing in prominence, on the left and on the right. In 2017, a new presidential administration returned white supremacy—which counts anti-Semitism as a fundamental tenet—to the mainstream of American politics. And that embrace from the top has emboldened violent actions all over the country. According to data recently released by the FBI, there were more religion-based hate crimes reported in the United States in 2017 than at any other time since immediately post-9/11. The majority of those crimes—58 percent—were committed against Jews. “The people who perpetrated Charlottesville are responsible for their own actions,” Rabbi Josh said. “But actions of hate are often preceded by words of hate, and we’re seeing that from the highest offices in the country.”

So how do we reconcile all of this? I’m not sure. But as I continue feeling out my own relationship to Jewish identity, ritual, and observance, the thing I keep coming back to is joy.

I’ve heard many explanations for why Jewish wedding ceremonies end with the breaking of a glass. Our officiant phrased it in a way that resonates with me: by breaking something fragile, we are reminded of the brokenness that exists in the world. Without that brokenness, that darkness, we cannot recognize joy. And conversely, we cannot repair what’s wrong in the world unless we can also rejoice.

In hateful times, joy can be an act of resistance. By having a Jewish wedding ceremony, we invited our family and friends to publicly revel in our heritage, to celebrate a rite of passage through traditions passed down over millennia. We lit candles and drank wine, sang and danced, laughed and applauded. While fear mongers and bigots tightened their hold on our country’s political center and public consciousness, having an unabashedly joyous Jewish wedding was our way of sticking a thumb in their eye.

On our wedding day, we rejoiced. The next day, we grieved. And in the year and a half since, we’ve been picking up the shards.