Sum-up of the wedding vibe: An intimate celebration planned from across the sea.

Planned budget: £5,000 (including flights and hotel) 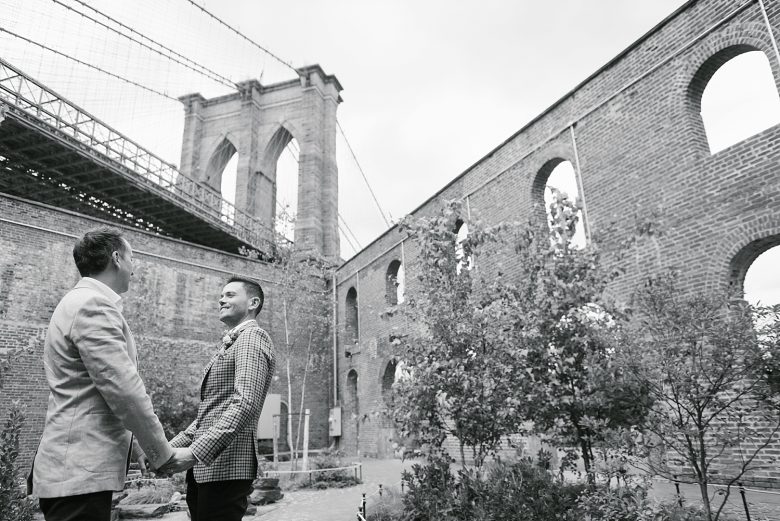 Anything else we should know:

We flew from England to marry at New York City Hall in September 2016. We chose to marry in New York over London; we wanted the whole experience involved in getting married abroad. Having been to New York City together and separately over the years, we both fell in love with the vibrancy, differing cultures, and excitement of the city. We had also considered San Francisco, but when it came down to it, nothing could beat marrying against the backdrop of New York.

Once we began to seriously look into marrying in New York, we were surprised at how straightforward and flexible it was to arrange a city hall wedding. You just can’t do that in London, what with the time needed to apply for and get a marriage license and booking a register office. And as we both spend quite some time in the capital, it wouldn’t have felt as special marrying on our own doorstep.

We decided we wanted to keep our wedding day just for the two of us and with no friends and family. It was just the two of us, and our witness was our photographer, Jocelyn Voo from Everly Studios. Then when we returned home, we hired a country pub for the day for a party.

After the ceremony, we took a cab to Dumbo in Brooklyn where we spent two hours having our photographs taken in and around the various sights and backdrops. It was the most fantastic location for a wedding and photographs. I guess as we stood out a little (not just because there was a photographer with us!) wearing matching boutonnieres, strangers kept coming up to us there and on the subway later (we went for a celebratory dinner at the NoMad restaurant at the NoMad Hotel) congratulating us on getting married. They were simple moments but made our day that little bit more special. One woman from Australia told us that she hopes same sex couples will be able to marry in Australia soon. The freedom to marry in New York City shows how important Pride still is to equality and how fortunate LGBT+ American and British couples are to have such rights. Every same-sex couple needs to offer their gratitude to those who fought hard and sacrificed so much to enable couples like us to marry. As John M. is editor-at-large for Gay Times magazine, he has written many times about the regimes and rulers in foreign countries—even the UK’s neighboring Northern Ireland—which refuse to allow us such rights.

Advice—it’s important to have a rapport with your photographer and have them know exactly what you want from your wedding pictures. If you want reportage-style photography, don’t pick someone whose only pictures on their website are staged ones. We had a Skype session with ours so that we were all on the same page, and she was brilliant. Go with your photographer’s advice when it comes to suggested backdrops, as they know the best and worst places and how much of your time will be eaten up by traveling to them.

If you are looking for a romantic setting for a wedding, don’t pick New York City Hall! Your ceremony will last all of about five minutes, there are metal detectors in the entrance, and the place will be full of nervous people about to wed. However, if you’re traveling from abroad, this is all simply part of the appeal for an authentic experience.