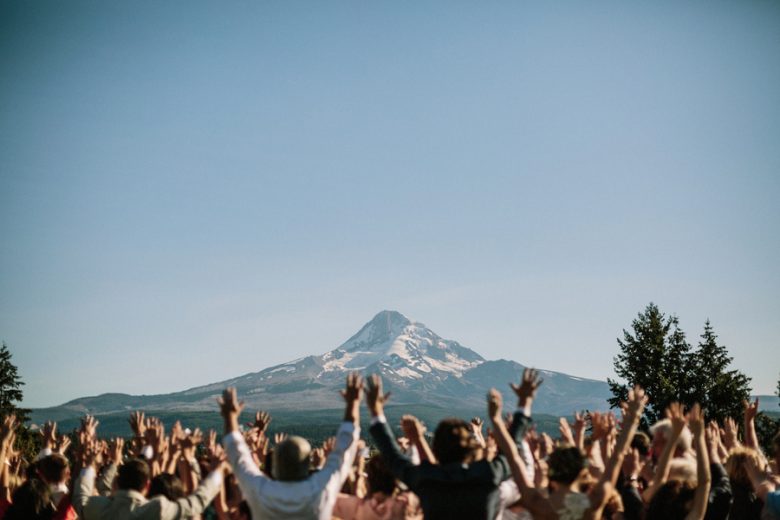 Sometimes I miss things, by which I mean I can’t actually live inside Instagram (I’ve tried). For that reason, I encourage everyone on staff to send me cool wedding pictures. When they sent me this one I had questions. Were they praying? Were they synchronized dancing? What’s the deal? Thank goodness for crowdsourcing, because otherwise I never would have heard of the concept of “plugging in.”

We reached out to the couple, Brian and Dana, for more information, and Dana explained it thus:

“Plugging in” is defined as becoming connected to or involved with (as in connecting an appliance, involved in a conversation, or in our case—interacting directly with the universe).

When a person “plugs in,” their arms become the two-prong plug whose appropriate receptacle is the sky above, the greater Universe beyond. If one truly engages while plugging in, there’s an unmistakable buzz or tingle, like low voltage electricity that courses from the sky via the arms, through the body and down to the earth—or ground—just like you’d expect electricity to do. The origins of plugging in can be traced back to Uncle Tony of Los Angeles, California. A surfer, photographer, and human extraordinaire. Uncle Tony’s nephew and close pal of ours Dave Guryn, learned about plugging in on a trip to LA more than a decade ago, and in turn brought back with him to NYC a souvenir that would transcend space and time (or so we hope). Plugging in is now habitual for us and our friends around the world. It’s something we do when that familiar euphoria washes over us during a time of pure joy—especially in the presence of friends and loved ones. Natural surroundings also tend to excite the urge to plug in. Plugging in is an ode, or a thank-you, to the Universe for allowing us to feel such elation and be surrounded by pure beauty. And in turn the Universe offers us a “you’re welcome” by shunting that electricity through us—and letting us know that it knows.

We could go on and about the metaphysical origins and implications of plugging in, but bottom line is that it’s a celebration of life. It’s something that needs no explanation if you’re partaking. It’s like asking why a baby laughs. One just does because that’s the appropriate reaction. And if there is a better time and place to plug in than at your own wedding—with all of your favorite people on the planet gathered together in one place—we’d love to know about it! So, yeah, plugging in is effin’ rad. However, the best part of the story has got to be that it was totally, a hundred percent unplanned. When they were shooting their save the dates with photographer Bill Moldt, they spontaneously ended up with a shot of them plugging in as a couple. But even though nature was a huge consideration for choosing Mt. Hood as the wedding venue, having a group plug in wasn’t part of the equation:

We had a shot list for Jonas, our photographer, but surprisingly the plugging in series was not on there. They weren’t planned. They just sort of happened. And to be honest, that’s exactly how it is with plugging in.