I want to start this letter off by saying how truly lucky I know I am to have the future in-laws that my fiancx is giving me. They’re warm, generous, wonderful people who I love deeply. That being said, it’s kind of knocked me off my feet how differently people can act once wedding planning has begun. We’re about five months into our one-year engagement and for each of those months, my future MIL has made five times the number of inappropriate jokes, comments, or demands about our wedding.

For example: she thinks it’s cute or funny (she can be a bit immature) to call me a bridezilla—a word I find extremely misogynistic and hurtful. She’s only let it slip a handful of times, but it’s also been in line with her ridiculous ideas surrounding our wedding that she thinks are valid decisions she has the right to make—like having a block of six songs by her favorite 1950s band played in the middle of the night (what an awesome way to get everyone off the dance floor!), or taking down the beautiful antique mirrors that line one wall of the reception space because she doesn’t want to be “forced” to look at herself (what?), or her never-ending additions to the guest list that, as far as we know, aren’t being matched by a larger monetary contribution. I don’t want to sound like a brat here, but weddings in New York City aren’t cheap (hello, $200 a head) and we’re splitting the cost in thirds with our parents and are finding ourselves quickly surpassing both of the other two thirds in how much we’re spending because of this guest list issue (there are about a dozen of her friends and family members on this list who we haven’t ever met or maybe spoke with once in passing). 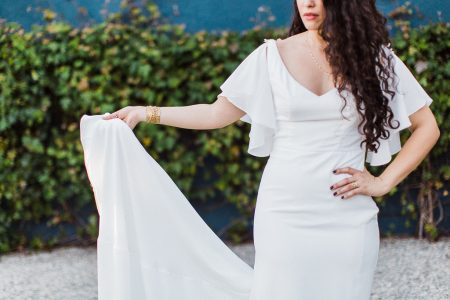 Q: Do you have any advice on how to deal gracefully with being called a Bridezilla? I have been really chilled through the whole planning process...

Every time one of these issues comes up, I either clam up and don’t say anything in hopes of avoiding a fight or say something more sternly than I normally would (like, no, we’re absolutely not playing twenty straight minutes of The Beach Boys, #sorrynotsorry), to which she smirks and shrugs and suggests she’ll find a way around.

Please help me out here—I need to figure out a way to speak to her about all of this with my fiancx (who’s a bit of a mommy’s boy and finds it hard to stick up to her) because the date and all of these decisions are quickly approaching and so are a myriad of fights I’d love to avoid.

A: Dear F the Beach Boys,

This right here is your problem: “I need to figure out a way to speak to her about all of this with my fiancx (who’s a bit of a mommy’s boy and finds it hard to stick up to her).” In-laws can be pushy. Moms get kooky ideas for what they want in a wedding. That’s all hard enough to handle in its own right (hello, that’s why I have a job), but it becomes impossible when your partner is used to just letting mom do whatever she wants. You’re not only figuring out that mom can be pushy and maybe a little mean. You’re finding out that, woof, there’s a really rough dynamic here that’s going to extend to more than just a wedding. When “she smirks and shrugs and suggests she’ll just find a way around” um yeah, that’s because everyone else will just let her have her way.

So, this is where you start talking to your partner. You won’t be able to fix or change their dynamic overnight. (In fact, start getting used to this struggle because you’re marrying right into it.) But still. Start that conversation of, “This is not okay; someone needs to shut her down; that someone needs to be you.”

This goes extra for something like the “bridezilla” accusations. The tricky thing about this sort of name-calling is that when you push back, it only “proves” the accuser right, fuels their jokes. It’s absolutely necessary for someone else—say, a loving partner, for example—to step in and say, “Hey, that’s not a funny joke, FTBB is making a reasonable request here.”

He’s used to letting mom have her way. Now he has to take a hard shift in perspective, centering you as his primary concern. When you are, that means whoops, sometimes mom doesn’t get everything she wants, sometimes mom hears “no,” sometimes her requests are set aside for the sake of you guys as a team.

So, yeah, this is that annoying kind of advice that applies to your partner more than you. But it would help you, in the meantime, to readjust your own expectations just a smidge. Mom-in-law is being outrageous, no question. But, well, people do like to dance to The Beach Boys (we’re talking I Get Around and not Kokomo, right?). Just cut her off at three songs, spread out through the night, and maybe consider them for a mother-son dance (God Only Knows is a popular choice for a reason). And she does get a say in the guest list. Depending on your venue’s capacity and your budget, grant her a set number of guests, and then let her know that she’s welcome to pay for more guests if she’d like any additional.

Clamming up is a totally fine response to the wacky demands in the moment. Then regroup with your partner when you’re alone (“Did you hear your mom say she’s taking all the mirrors down?”), figure out what’s reasonable, get on the same page together, and let him address it the next time it comes up. You can do this (together) (but mostly him).