This is self-catering your wedding for beginners- for folks who aren’t used to spending hours in the kitchen for a party of 40. I’m gonna point out the obvious- if you’re not good at or used to doing something, your wedding is NOT the time to try. Whether that means sew your own dress or find a great deal on flowers- if your wedding is your first foray into some project, you’ll be far more stressed than you need to. Just cough up the cash. 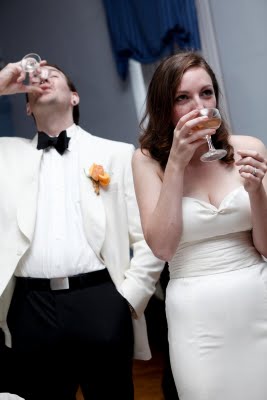 For me, self-catering is all about finding your boundaries- which includes the “can’ts” as well as the “musts.” For some people, having a reception for 25 works. Not for moi, with “immediate” family alone totaling over 70 (FYI- “immediate” for a big Italian family includes aunts, uncles, and anyone else you called “aunt” or “uncle”). Having 150 guests was in the list of “musts” for me. Which meant having a sit-down dinner of filet and lobster was in the list of “cants.” Believe it or not, Josh and I had toyed with the idea of a snacky reception long before butting against the budget wall. Something about sit-down dinners sounds so boring and promy to me. (not always the case, but definitely rooted in my own personal wedding experiences) My favorite parties involve lots of walking around, mingling, and serving yourself piles of food where no snooty waiter is judging your portions. Thus, the idea of the dessert reception was born. Dessert is a] cheap, b] fun, c] way easy to produce in mass quantities and d] always cute. (we indie bridal bloggers do love our wedding photos- and it’s just about impossible to have an ugly table of cookies and cupcakes, am I wrong?)

So the nitty gritty. 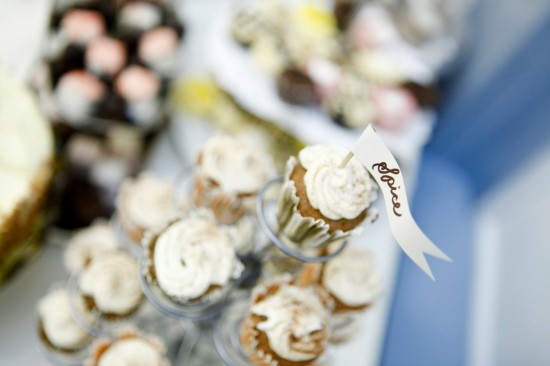 1. Stay. Organized. It really, really helps cut back the stress. Anyway that you can chop that stress level- well, go for it. This includes listing everything that you need to bring to the venue and home from the venue, blueprints of where things will be on the table, labels on serveware of what kind of food goes in what dish… and on and on. Excel is your friend. So are labels and post-it notes, and copies of your many lists (for any awesome helpers).

2. Don’t do it alone. This could mean having volunteers make food. Or it could mean my latest discovery- Thaw n Serve. This stuff is amazing. You can buy frozen, ready-made desserts or appetizers in bulk and just let them thaw, and throw em on a tray. Really. We got ours from a caterer friend- if you know anyone who caters, works in a restaurant, runs a school cafeteria, etc. milk those connections, definitely. We bought ours at cost, direct from the source. And if you don’t have connections, I’ve heard they sell similar types of things at BJ’s and Sam’s Club and the like.

3. You don’t need as much as you think. I talked to the same catering friend about amounts. He suggested I not worry so much about making sure there are exactly 150 brownies, 150 of each cupcake, etc. Assume each guest will have 10 “bites”. From there, it’s simple math. (a mini-cupcake would be one “bite” while, say, an eclair might be 2 or 3) 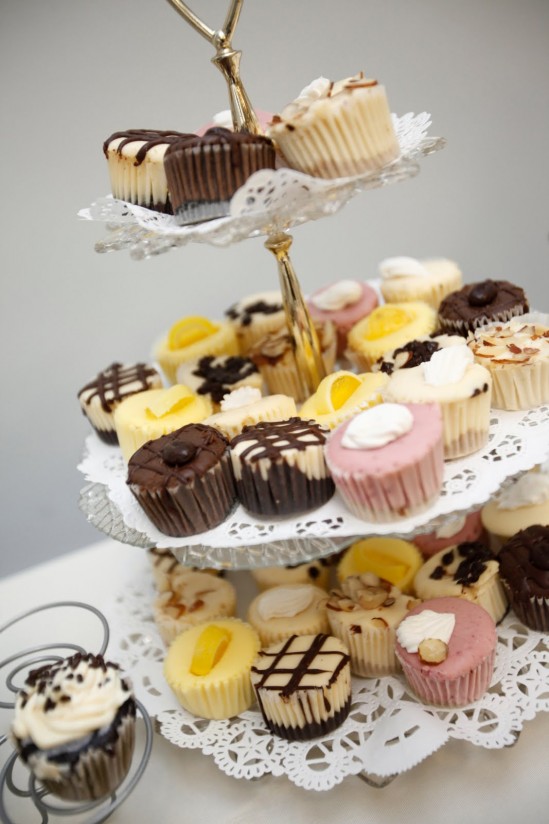 4. You need more than you think. When it comes to serveware, at least. Have tons of trays, bowls, serving silverware, etc. You’ll need much, much more than you’d think. Borrow from relatives, if you need to, and tape their names to the bottom of the bowl/tray so you remember who to return it to. Or, if you have those catering connections mentioned above, borrow the big ol’ commercial sized stuff.

5. Buy, don’t rent. Thrifting. Ebay. Yard sales. Restaurant supply websites. Anything is better than dumping your cash into the wasteland that is rentals. When it comes to tables and chairs, you may just want to try to find a hall that has them for you to use. We had our reception in the church’s “fellowship hall.” Places where groups tend to gather anyway will have stuff like chairs and tables and (muy importante) freezer space. Luckily, if you’re doing a dessert, cocktail, or other type of snacky reception, you don’t need as many tables and chairs, anyway.

6. Have a quit-time. Being both event coordinator and bride at the same can only go on for so long. Pick a time before the wedding where you make a complete transfer of power. The day before, I delegated everything that needed to happen the day of the wedding. And then I shut down. I was done wedding planning. It was TOUGH. I’m a major perfectionist and I have a guilt complex about asking anyone to do anything for me. So not only did I wonder if things would be done the way I wanted them, but I felt bad asking someone to handle it. ….Get over it.

7. Plan a set-up and clean-up time. Duh, right? But this is something that you not only need to coordinate with any nice helpers, but also the facility. Our church was nice enough to give us all day the day before to set up, and also let us leave our stuff after the wedding and come back later that night to pack it away. 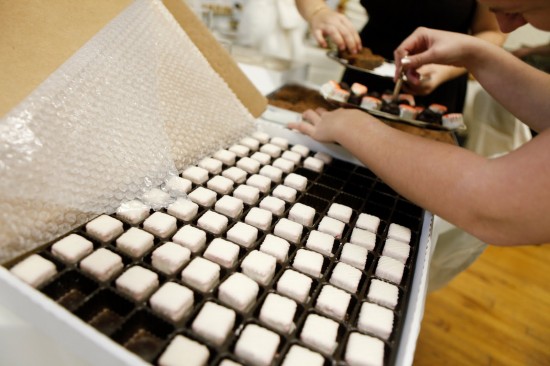 8. Don’t forget the details. I was constantly doing stupid stuff such as planning on serving coffee, but not realizing that this meant I would need cream, sugar, stirrers… you get the idea. Think it all through. Don’t forget trash cans, places for dirty dishes to collect (we used big galvanized pails) etc etc.

9. Know what you want. When I say this, I’m thinking of all of the little ways quality or aesthetics may suffer in DIY. For example, I knew I did NOT want paper plates. I also knew I didn’t want ugly metal chairs. Set those standards first, then look at how the numbers will fall into place. If all of the extras will impact the price tag enough, it might not be worth it to DIY.

10. Hire help. Even if you’re not serving dinner, you’ll want someone to man the food. Just to make sure nothing runs out and there aren’t piles of trash everywhere. You can hire catering staff for this, but we hired some teenage girls- think like, the responsible kids your neighbors hire to babysit. They LOVED being at a wedding, plus, financially it’s a win-win. Making $100 for 3 hours worth of work is a sweet deal for a 17-yr-old. And it’s super reasonable for a bride to shell out. The key to this working out is delegation… and more of that”organization” stuff I was talking about earlier. Give each person you hire specific responsibilities and lay out a very detailed list of what they need to do- even down to a timeline, if you think it’d help.

11. Have a plan for after. You’ll have a ton of food leftover. Really. Either line up a shelter to donate to, or be ready to throw out a lot. If you’re going on honeymoon right away, your family or friends will be the ones handling this. So have a game plan for them. Those are the tips, kids. Now here’s the emotional junk- I was worried that people would be offended that we weren’t serving dinner. That guests would be bored without an open bar. That I was imposing on the awesome awesome people who offered to help. There were a few, rare people (who don’t know me as well as they think) that seemed to pity me for “giving up on the dream” of having a big dinner-style wedding with an expensive caterer. With all of that—there was an itty, bitty, teensy, weensy part of me that wondered if maaaybe I was missing out on something by catering my own wedding with only dessert.

I could write novels on how wrong I was. So I’ll just leave it at this: I was wrong. My wedding wouldn’t have been nearly as meaningful without the hours spent in prep and clean-up with the tried-and-true family and friends that stuck through it all. And I don’t mean to say that everyone should cater their own wedding—that’s not nearly the case, but if you’re catering your own wedding, and your worried it’s gonna be a bust… don’t. Wedding photos by Carina & Amanda of Love Me Do Photography