Sum-up of the wedding vibe: A weekend of magic, color, community, gratitude, and deep love.

Soundtrack for reading: “Hey” by KING 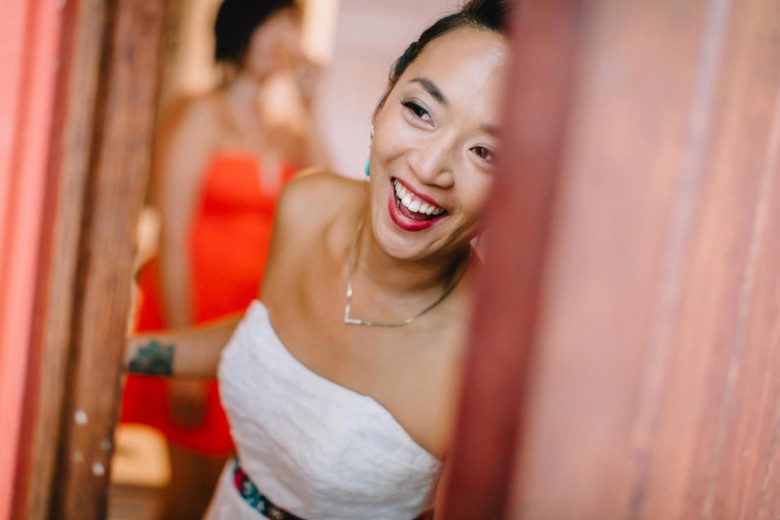 Favorite Thing about the wedding:

Our weepy vows, making the commitment to each other and the community. Our first dance (choreographed to Janet Jackson’s “When I Think of You”). The heartfelt and hilarious toasts.

other cool stuff we should know about:

When we first met, Rob was in a relationship and I was totally done with relationships! We had a ton of friends in common, and collaborated on a group show with Rob’s crew, Trust Your Struggle Collective, at Rock Paper Scissors in Oakland. I always remember fondly how sweetly encouraging and positive Rob would be.

Shortly after, he moved to New York to finish his BFA in Illustration at Parsons. We stayed in touch and he invited me to collaborate on one of his projects, Come Bien, a collaboration between artists and writers of color. We would talk over the phone and one time, I remember talking to him for over an hour, which for me is bananas. …But it was so easy to talk with him. At the time I was working on my first business plan to refocus my graphic design work, and in it I secretly imagined working side-by-side with him in the future. I think I already knew that we would be in each other’s lives as partners in some capacity or another.

When he moved back to the Bay, we would spend time together as totally, refreshingly platonic friends. Our closest friends might have suspected that we should try something more, but we were totally happy as friends and creative co-conspirators.

He finally asked me out in 2012… much to my surprise (but what our friends had been waiting for, for some time apparently). From the first date, it was clear that we had found in each other kindred spirits, a deep love, a feeling of home. The first year of our relationship unfolded gently, unrushed, and with an energizing spaciousness which we still maintain in our marriage today. No relationship had ever been as easy, nor felt as right. Six years of friendship as a foundation was a real blessing.

Currently we are finishing up final edits on his first children’s book, Furqan’s First Flat Top. Rob wrote and illustrated it, and I’m doing the design (and editing), and it should be printed and in our hands in early 2016! Rob is an illustrator, blogger, muralist, and excellent breakfast burrito maker. While scaling back my graphic design work, I cook at a neighborhood restaurant, and am working to open my first restaurant, Mudita Ramen. This life-long dream is to open a community-driven and conscientious neighborhood restaurant serving nourishing, vegetarian ramen to the good peoples of Oakland.