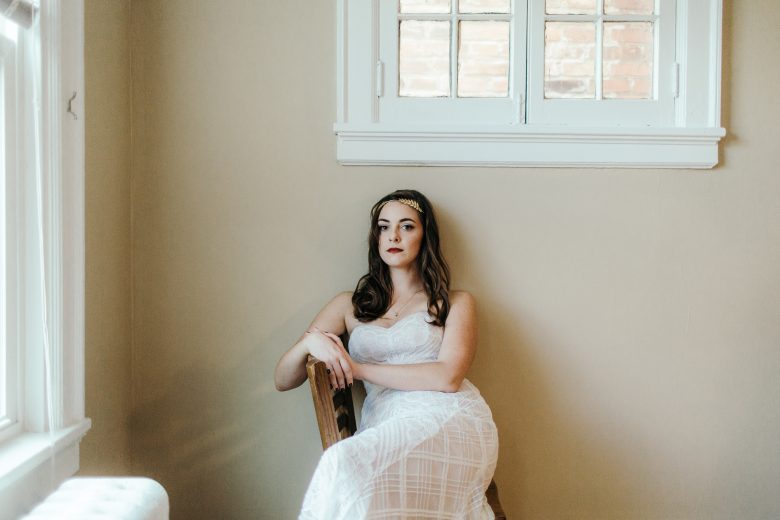 When I first got engaged, I had certain ideas about what my wedding dress should look like.

I decided it wasn’t feminist to wear white. Instead, I thought I’d go for a blue gown like Blair Waldorf when she married Chuck Bass on Gossip Girl, the greatest television show of our time. I also flirted with the idea of sporting big florals down the aisle, because floral patterns are basically as much a part of my body as my right arm. Then my mom took me to Kleinfeld’s and everything changed.

Within forty-five minutes of going dress shopping for the first time, I tried on a white Grecian style gown, and completely forgot about my feminist opposition to wearing white. By the time it was paid for, I don’t think I even remembered the dress was white. It didn’t actually occur to me that it was a traditionally white wedding gown, as such; it was an exquisite dress I adored, and it just happened to be white. That dress made me look as close to Christina Hendricks as I am ever gonna get, so I fell almost as hard for it as I did for my fiancé (I kid, I kid).

RELATED: The best and worst parts of living with your partner

As I have already written about, I found wedding dress shopping a surprisingly body-positive and empowering experience. Then, a few weeks later, when staring idly at a picture of my wedding dress on my phone, it finally hit me: the dress was white! White like the conservative wedding gowns they make Barbie dolls and princesses of small European countries wear. My feminist sensibilities were offended by old-fashioned wedding dresses like that, weren’t they?

Patriarchy is why we can’t have white things

In search of answers about exactly how anti-feminist it is to wear white to your wedding, I began doing what any self-respecting academic would do: researching the hell out of the question instead of going out on Saturday nights. What I discovered is the custom of wearing white to one’s wedding didn’t start out as a manifestation of sartorial sexism. The white wedding gown actually became popular in 1840, when Queen Victoria wore the hue to her nuptials. While white is a color that has historically symbolized purity and virginity, that’s not the reason Victoria chose it. The truth is, she had some prized white lace she wanted to show off on the big day. Because she was the goddamn queen, Victoria got what she wanted. And so a style of wedding dress that has subsequently become a symbol of patriarchal oppression was popularized by the most powerful woman of her era. Yes, the history of wedding dresses is ironic.

RELATED: How pop culture turned me into a feminist

Despite its pretty non-sexist origin story, the white wedding dress was subsequently co-opted by a patriarchal society that decided to use white gowns as a symbol of women’s sexual purity. That’s why they’re customary in church weddings. It’s also why comedians make jokes about reality stars who’ve been married four times wearing white to their fifth weddings. The implication is the right to wear the color white is something women are meant to earn. It’s not any old color like green or purple. You have to work for the privilege to wear it by keeping your legs shut the way your male elders want you to.

Of course, despite its sexist associations, I do know a lot of progressive people who wore white on their wedding days. They just held their noses and ignored the sexist associations. However, I like to literally wear my feminism on my sleeves. I strive to make my feminist identity clear by what I wear, which is why I started boycotting American Apparel when it turned out Dov Charney was a total tool.

A NICE DAY FOR A (FEMINIST) WHITE WEDDING

When it comes down to it, part of me worried that by wearing a white gown, I’d be buying into patriarchal symbolism. I worried I’d be aping virginity to appease a patriarchal tradition. I worried about mansplainers with nothing better to do seeing a picture of my dress on social media and declaring me a sellout. I also worried a bit about what would happen if I spilled red wine on it at the reception.

RELATED: Stop asking me if I’m losing weight for my wedding

After much reflection, however, I’ve decided I don’t have to wear a non-white wedding dress to look like a feminist. It’s time to reclaim white. Why should feminists be limited to only wearing certain colors, because patriarchy decided to co-opt the look a freaking queen wore on her wedding day?

In fact, the more I think about it, the more I believe reclaiming the white wedding dress can be a fabulous feminist act. I call out slut-shamers who argue wearing short skirts is “asking for it,” so why would I allow sexists to dictate how I feel about clothes culturally associated with sexual purity? I’m re-appropriating the white dress for feminist chicks who just happen to like the color.

I’m going to wear a white freaking dress to my freaking wedding, and it doesn’t make me any less of a feminist.

Originally published on She Does the City.

Sarah Sahagian is a feminist writer and academic living in Toronto. Her work has appeared in such publications as She Does The City, xoJane, The Beaverton, and The Huffington Post. Her feminist-friendly young adult novel, Good Girls, will be released by Inanna Press this fall.