Photo by Collin Pierson of the Berta 2019 Fall runway show
The Site and our mobile application may contain links to affiliate websites, and we receive an affiliate commission for any purchases made by you on the affiliate website using such links. We are also a participant in the Amazon Services LLC Associates Program, an affiliate advertising program designed to provide a means for us to earn advertising fees by linking to Amazon.com and affiliated websites.

As a fashion journalist and bride-to-be, attending Bridal Week in New York City was basically a no-brainer. I’d have the opportunity to scope out upcoming trends in bridal wear while also getting some inspiration for my own wedding day. Truth be told, as much as I love all things fashion, I actually have no idea what I want to wear when I walk down that aisle. Plus, many people have told me that even if you think you know what you want, everything goes out the window once you actually start trying on dresses. (Is this true? I’d love your opinion on this theory!)

At any rate, going to Bridal Week seemed like an obvious win-win situation. Who wouldn’t want to gawk at gorgeous gowns all day? While I’ve attended “regular” fashion week before, this was my first time checking out the bridal runways. I didn’t participate in the entire week of events—largely because I’m not based in New York City and, you know, deadlines—but I made the most out of my weekend in the city. I viewed eight collections total, and it probably goes without saying that I fell in love with just about everything. Even pieces that weren’t quite my style, like a sequined mini dress or a feathered frock, were stunning to see in person. What’s so great about a runway show or presentation is being able to watch the clothes in motion and get a feel for what they look like on an actual body, instead of hanging lifelessly on a rack or mannequin. Of course, it’s no secret that the bridal and fashion industries have long struggled with diversity and inclusion, especially when it comes to the models who make it to the runway and on magazine covers. While the tide is slowly turning in the fashion world—for example, designer Claudia Li featured an all-Asian cast at her first NYFW show, which I wrote about here—progress isn’t moving as quickly as it should. In the bridal space, there have been some steps toward greater representation of all types of bodies and backgrounds, but it simply hasn’t been enough. The question is really quite simple: When will these industries reflect all of the people who consume its products? Based on my experience at Bridal Week, the harsh truth is that we still have a long way to go.

As a woman of color, I’m acutely aware of when I’m the only WOC or POC in the room. I can’t not notice it, and I often say that this stems from my upbringing in Nebraska, where this happened all the time. In fact, being the only POC in a room at any given moment was the norm. Now that I live in Washington, D.C., where cultural and racial diversity is definitely more prevalent than back in my home state, it’s safe to say that this phenomenon occurs less frequently. But it does still happen, especially in places or situations that have been traditionally devoid of diversity. Take, for example, Bridal Week. I noticed that diversity was lacking on two fronts: on the runways and in the seats that lined them. While each show and presentation I attended did have at least one model who appeared to be a woman of color, that was pretty much the extent of it. As for those of us in the crowd, cultural and racial diversity was only slightly better. Bridal shows are predominantly attended by buyers, editors, and other industry tastemakers. The front row is, unsurprisingly, where the VIPs sit. Judging by what I saw, non-POC mostly filled those seats. There were a few exceptions—I, for example, sat front row at three of the shows I attended. That’s certainly not insignificant. But I was often one of only a few POC in those premier spots.

Overall, the experience made me wonder about how the stories of Bridal Week are getting told. What’s often overlooked in the media landscape is that who tells the story matters just as much the story itself. If the front row is almost exclusively comprised of white, cisgender, able-bodied individuals, what does that mean for the industry as a whole? Well, for starters, it means that we’re hearing—and seeing—a lot more of the same. And that’s really a shame, because bridal gowns and weddings in general aren’t just for people who meet those criteria.

It’s important to note that even though I belong to traditionally marginalized communities, both as a woman of color and as a first-generation American, I am afforded certain privileges, like being cisgender and relatively thin. While my sitting front row at Bridal Week was great for advancing the voices of women of color and first-gens, it didn’t really do much for those in the transgender and plus-size communities. So perhaps my main takeaway from Bridal Week is this: The glitzy affair is fun and inspiring, but even glamour has its limits. The event won’t be a success until it is truly reflective of all brides and until those on the sidelines represent the diverse spectrum of all consumers. It’s a long overdue change. 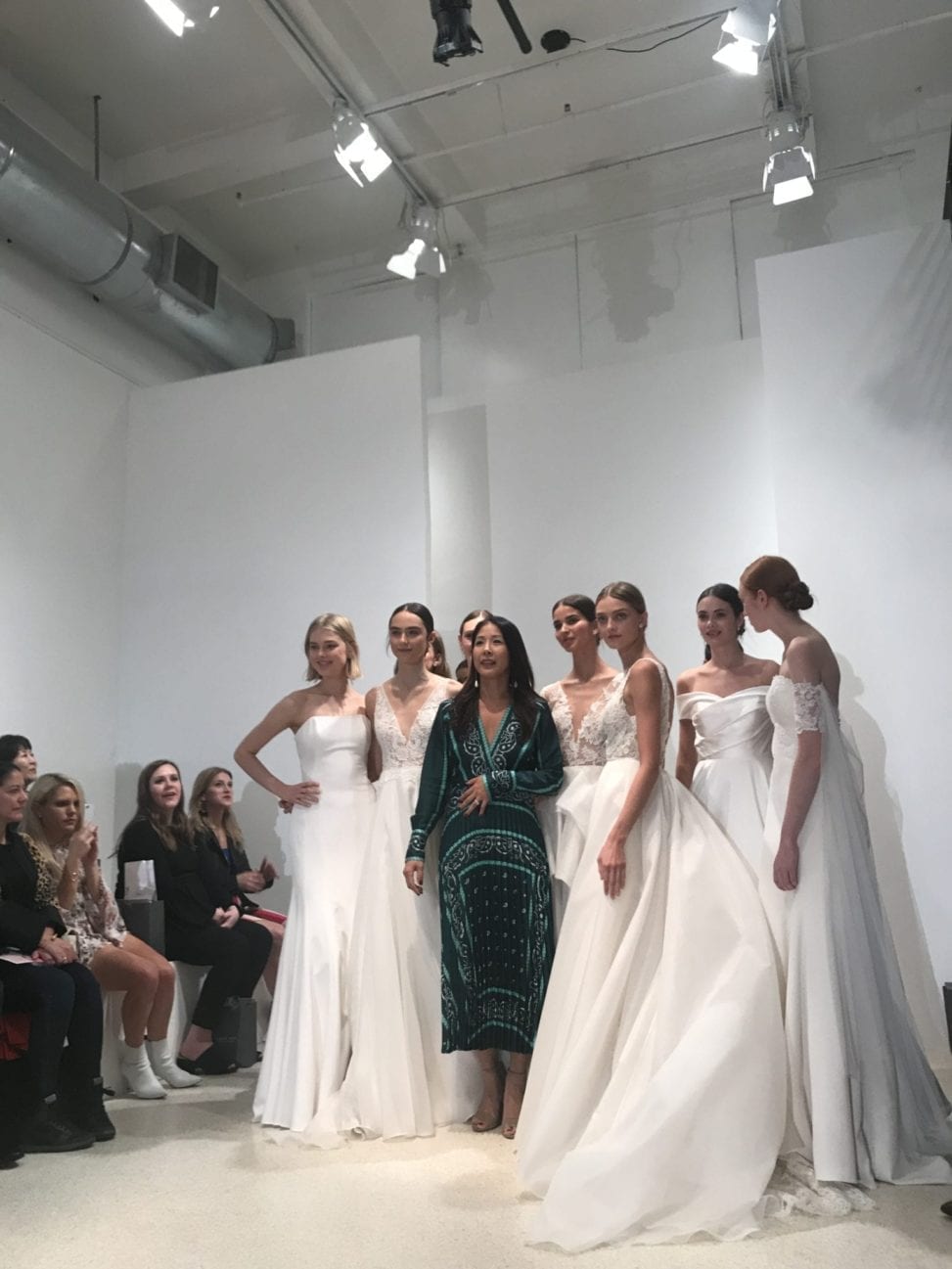 Frustrating though it may be, we have more power than we might realize. Supporting brands and designers who are taking the lead in embracing diversity is the most obvious place to start. I know that as I begin shopping for my own dress, I’m going to pay attention to both the gowns and to the women wearing them. Do I see myself reflected in the ad campaigns? In the social media posts? If not, I’m probably better off searching elsewhere. As for those of us who cover Bridal Week and the industry overall, the key is making room. Let’s make room for the newcomers, the outsiders, the voices that have traditionally been left out of the conversation. More diversity doesn’t mean giving up your seat at the table—it just means you’re willing to put in the effort to look for an extra chair.

Mekita Rivas is a freelance journalist and creative consultant based in Washington, D.C. She's currently a fashion news writer for Teen Vogue. In addition to A Practical Wedding, her bylines can be found in Brides, Glamour, New York Magazine, The Washington Post, and others. When not writing—or thinking about writing—she enjoys working out, exploring D.C.'s food scene, and planning her next escapade. Follow her on Instagram and Twitter.