Photo by Maddie Eisenhart for APW
This is a paid post from an APW sponsor. For more about APW and how we make money, please click here.

Despite running a wedding website, I am somewhat famous (in my personal life, at least) for rarely attending weddings, and for being a bridesmaid even less often. It’s not that I don’t have close friends; it’s just that said friends are nonconformists, which means not a ton of weddings and even fewer wedding parties. So when people complain about the twenty-seven bridesmaid dresses in their closet, I’m always sort of envious. I’ve gotten in on the bridesmaid gig twice (for the same friend, ten years apart). And I loved being a bridesmaid both times, down to the heavy lifting and the never-wear-them-again dresses.

But this year, my friend Gina asked me to be one of her bridesmaids. Gina is one of my very best friends from high school, someone who has become more like family over the years (and not just because we’re the people in the will to raise her nieces and nephews, should something happen to her sister and brother-in-law). What I’m saying is she’s family—her family is my family, and most of the other people in the wedding party are also my best people from way way back. And when these kind of people ask you to support them during a big moment in their life, the only natural way to respond is to throw them over-the-top parties and get them super fun (and sometimes slightly absurd) presents. (Because I’ve never gotten a chance to help throw a bridal shower, so this, my friends, is my time.) And then, just because you’re on team #GoBigOrGoReallyBig, you also drag them out to Palm Springs and force them to take engagement photos in cactus gardens, like this: In short, I’m super excited that Gina found a really truly great guy to marry, I’m thrilled to be one of her bridesmaids, and I’m determined to make this whole thing as fun as possible. Because you know, isn’t that the whole point when it comes to celebrating your friends joy?

But when I started to look around the Internet, going down the rabbit hole of bridal shower paper goods, bridal shower gifts… and let’s not even get into the grim world of wedding party gifts… I found very, very little fun. Pretty? Sure. Boring? Hell yes. But fun? It seemed nowhere to be found.

And while maybe there are people out there who give their best friends serving bowls and their bridesmaids matching pearl studs, that is not what my people do. I love both of those things, don’t get me wrong, but those are not the gifts I’m going to throw down with to celebrate this upcoming wedding.

These Are the Wedding Photo Presents I Gave My BFF

Instead, to celebrate one of my best people finally finding someone who really makes her happy, I decided to do a few things. First, we dragged Gina and her fiancé, Lucas (she proposed to him BTW), out to Palm Springs two weeks ago, to take the above mentioned engagement photos. Then, Maddie and I stayed up late ordering tons of gifts from The Wedding Shop by Shutterfly. The thing about shopping for my lifelong friends is I never want to get them something generic, but I also want to get them something… nice. We’ve been working with The Wedding Shop by Shutterfly for years, on everything from wedding stationery to photo books and even holiday gifts, and every time I’m genuinely impressed with the quality of their products. (I gave all our family members the acrylic block prints for the holidays, they were that good.) Plus, Shutterfly has the added benefit that you can personalize pretty much everything they sell, which means that for Gina, I could make gifts that elevated the pretty to the pretty and meaningful. (This might be the one place in the wedding where inside jokes are perfectly okay.) Some of the things I got Gina were thoughtful, like this beautiful acrylic block engagement photo. (Did I mention I’m completely obsessed with Shutterfly’s acrylic block prints? We made them for Maddie’s bestie in the fall, I gave them to our family as holiday gifts, and I’m now needing to order some for myself.) But then. You know. We ordered other stuff. Poor Gina is surrounded by family and like-family that show their love by messing with her. Just… you know… a little. So when Gina and Lucas couldn’t be bothered to get a photo of the two of them taken, her sister took things into her own hands and Photoshopped their faces over this early photo of Brad Pitt and… some other lady (points in the comments if you can identify her). But then, to level up, she had it matted and framed, and hung it in her family gallery wall. (IF YOU CAN’T GET IT DONE, WE WILL GET IT DONE FOR YOU.) So when Gina told us that she wanted a photo blanket, I could only assume that she meant this: SURPRISE GINA. Because really, what says “You’re getting married,” like doubling down on your sibling’s joke, with a customized photo blanket with your faces on it? The best part is that the blanket we got Gina is completely woven instead of printed (it’s one of Shutterfly’s newer products, and I could not believe it was real when I unwrapped it, because HOW). But I can only assume this blanket will last them the rest of their lives.

You’ll Want to Give These Thoughtful New Shutterfly Gifts 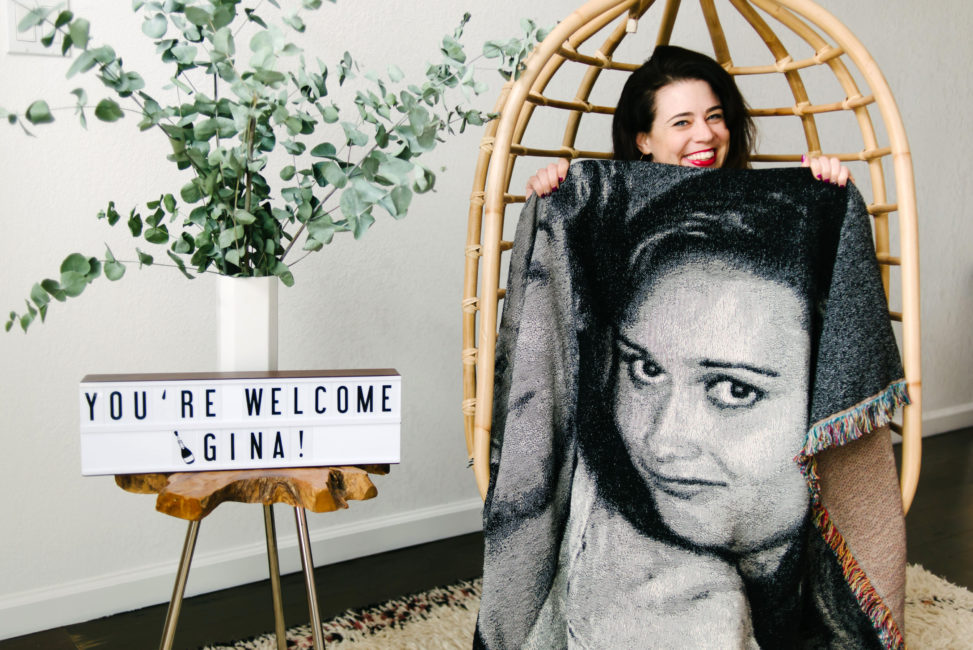 One of the best parts of being in Gina’s wedding (besides, obviously, the photo blanket) has been to get to hang out with people I’ve known and loved for ages. Most modern wedding parties are a mix of people you’ve known for a while and people you’ve known just a few years. But Gina’s wedding party happens to be pretty much the old crew back together again. That means hanging out brings up all the best memories, and it gives us a chance to walk down memory lane. What makes The Wedding Shop by Shutterfly a nice (and frankly, easy) place to shop is that they have a mix of photo and non-photo gifts, so you can do all the special sentimental presents at the same time you’re doing the fun stuff. And because we’ve already established that our crew’s love language is to give gifts with our faces plastered all over it, I made Gina a memory game featuring photos of us from what suddenly feels like a million years ago. (How pretty is this picture of Gina in high school?)

We also decided to help Gina out by ordering a bunch of gifts she could give her wedding party. Because what is love, if it’s not being like, “I GOT YOU ALL THESE PRESENTS FOR OTHER PEOPLE.” But also, these people are my people, so I took the liberty, because why not. While there is plenty of wedding jewelry out in the world (yeah you can find a million necklaces online that say “#TeamBride” but like… How long exactly is your friend going to wear that?), with Shutterfly you can customize their jewelry to include fun nicknames, inside jokes, or just… better things than #TeamBride. We ordered Gina’s niece (my goddaughter—one of my other favorite people in the world) this engraved Mermaid of Honor necklace. I’m glad Tyler-Anne doesn’t read wedding websites, because she is going to lose her damn mind when she opens this. (She’s a brand-new teenager, but has a long history as a mermaid.) Gina’s life got Queer Eyed a long time ago, which is to say she has two gay bridesmen. Her man of honor is Jacob, who happens to be a high school best friend of mine, my husband, and Gina. Back in our conservative hometown where being gay was pretty damn dangerous, Gina was the first person he came out to, and I was the second. (We obviously both said, “Um, we know.”) Since a personalized flask seemed way too heteronormative for him (though in hindsight, it might be the perfect gift for Gina’s brother, also a groomsman), we got Jacob a personalized champagne glass, plus this bracelet engraved with “man of honor,” so he could be reminded he’s always going to be Gina’s #1 (or #1.5, at least). And last but not least, of course we had to order something for Gina’s sister, crafter of the most impeccable Photoshopped photo ever. And I knew that clearly, what her sister, Kathy, wanted most in this world was a sixty-piece puzzle of Gina and Lucas’s faces. I can’t wait to come play this super hard puzzle (don’t order a puzzle in greyscale, people) on the next major holiday. P.S. Gina, I got you this cutting board to commemorate your union, which you can do by chopping things on it. Cute, no? Please remove the flowers before use. Now I have nothing to do but get excited about the bridal shower. I hear it’s going to be Game of Thrones themed.

This post was sponsored by The Wedding Shop by Shutterfly. Shop for your wedding from top to bottom, starting with save the dates and invitations, to day-of decor and wedding party gifts, all the way through to wedding albums and prints. (All of the stationery featured in this post, including the menus and invitation, are from The Wedding Shop by Shutterfly.) Click here to explore everything the wedding shop has to offer.