Photo by Kenzie Kate Photography
This is a paid post from an APW sponsor. For more about APW and how we make money, please click here.

Anyone who’s been reading APW for any amount of time knows the story of how we made our wedding invitations ten years ago. In short: they were beautiful, and they were complicated. (I mean, really complicated: one piece was hand letter pressed, one was hand Gocco-ed, one was printed on our home printer.) We designed them mostly ourselves, and we’re not designers. They were really nice, they were pretty affordable, and the time that we put into them was absurd.

Why? Were we paper obsessives that thought it would be fun to wander around San Francisco during our rare time off together, trying to find someone that would let us use their industrial paper cutter for free? No. We just wanted nice invitations, we didn’t have a ton of money to spend, and that’s the only way we could figure out how to do it. In short, wedding invitations in 2009 were a lot like walking uphill in the snow both ways. It wasn’t fun, and it wasn’t that cheap.

When we started planning our intentionally-over-the-top ten year anniversary party, I knew that invitations were going to be one thing that were going to be way way easier. That’s because I’ve been working with Minted for years, making amazing Holiday Cards, rounding up their best wedding invitations every single year. So I knew exactly where I was going to order our anniversary party invitations. I created a Pinterest board, put all my favorites on it, had David narrow it down to one or two he liked the best, and got started. The funny thing was, the second that I opened up Minted’s software, I realized that while I’d written endless posts about Minted’s Wedding Invitation Suites, I’d never actually… created one. I didn’t know how it worked, really. Spoiler: the process was a delight, and I consistently felt like I was getting more than my money’s worth.

I started with the invitations themselves (this is the design we ultimately landed on). I put in all our wording, and then left notes for the designer about tweaks I wanted them to make. I was able to leave notes that said, “Could you make sure this is spaced nicely and flows?” so I didn’t have to spend countless annoying hours dragging and dropping text till I thought it looked exactly right. I clicked “custom foil” on… pretty much everything, since I remain a sucker for cool printing treatments. But the true delight came when I’d finished the invitation design. At that point, Minted showed me all the additional options I could add to create my invitation suite. (And weirdly, not a single option involved “borrow friend’s Gocco, try to learn how to screen print on your kitchen floor.”) Nope. Instead I just clicked off options like “Belly Band“, or decided that I’d change the “hotel” card to include a note about why we were throwing the party. I opened each item that I wanted, added some text, and left a note for the designer. I even added custom stamps and envelope printing, so unlike a decade ago, my envelopes looked real cute without any additional cost or effort on my part. Then I waited. And about 48 hours later, a Minted designer contacted me, and they had created not one, but two whole designs for each item, based on my notes. They told me to check off the design I liked best… or leave them notes if I wanted further changes. Luckily for me, the designs were perfect, and I ordered them.

(Note: after I ordered our invitations, I headed back to Minted to order programs and menus. Each time, a designer went over and above, even designing an “in memorium” section for the back of our programs, without me asking, and for no additional cost.) Y’all. Every piece of paper we got from Minted was beautiful. And my stress level for the whole project approached zero… which is not something I can say for my invitations a decade ago.

You might wonder why I decided to create such beautiful invites for our ten year anniversary party. And the simplest answer is: because I could. But the real answer is a little deeper than that. I realized that when you spend the time to send someone a beautiful on paper invitation that reflects the tone of your party, they take the whole thing a little more seriously. And since we were having a party that took time and effort for people to come to (and wasn’t a wedding, and didn’t have the same obligations), we wanted to message to people that the party was important to us… and also something we were putting a lot into, and would be worth their time. And while RSVP rates are still hot garbage, overall it worked. We had people who were thinking they wouldn’t come, who changed their mind after getting our Minted invitations.

Was it the custom gold foiling that changed their minds? We’ll never know. But I’m counting it as money well spent.

And for those of you who might be curious, here are the invitations I almost picked. 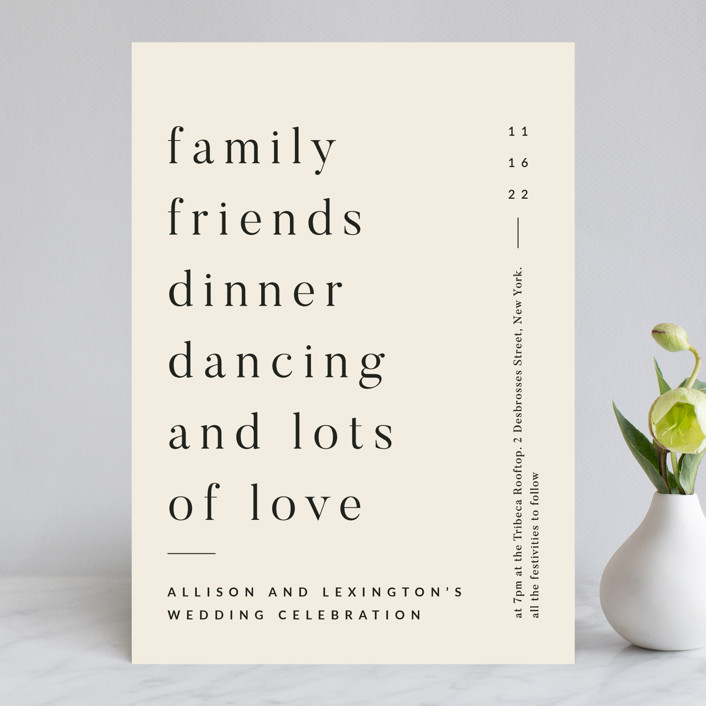 The Loden Invite from Minted This post was sponsored by Minted. Minted sources designs from independent artists all across the globe, meaning you can guarantee high quality and uniqueness while supporting artists to make a living doing what they love. Minted is easily one of our favorite destinations for wedding invites (clearly), day-of decor, and with their new Color Library, gift packaging and accessories. Click here to find everything from save the dates to invitations, decor, and more.